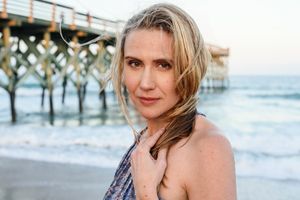 Jazz and Blues Vocalist. Songwriter. Actress. Artist. Storyteller. There are defining moments that shape the unique story of our lives. Carrie loves to share her story through musical performances, interweaving known jazz and blues standards with her versatile, award-winning original material. Whether taking a “Sentimental Journey” while reminiscing on her album “Home” or singing the blues on her latest album “Waves”, Carrie, a recent breast cancer survivor, shares hope, joy, struggle and peace through music.

Born to a musical family, Carrie studied classical piano beginning at age 7. She was performing Mozart by age 9 at her local church where her father was the pastor and her mother was the choir director. Feeling somewhat encumbered as a child by having to play “only the notes that other people told her to”, she began writing her own compositions, never realizing where the journey would take her.

By college Carrie was performing on stages across the east coast. An experienced traveler (thanks to several moves around the country) as well as an observer of life and people, Carrie’s writing expressed everything from faith to simple stories of everyday life. Carrie lived in Nashville for four years, which allowed her the privilege of fully studying the art of songwriting under the tutelage of world-class songwriters. She worked as a session singer and performed at many clubs across the city.  She also recorded and released her independent CD project “Redemption”, garnering a semi-finalist award with the UK International Songwriter’s Competition for her song,“When Love Was Green”.

Carrie moved to North Carolina in 2008 and quickly adapted to her new musical home; singing and writing jazz and blues. By 2010 she had won singer/songwriter of the year from the NC Songwriter co-op for her vocal jazz original song, “Queen City”. By 2012, she was named North Carolina’s Top Charlotte Vocalist by the Carolina Entertainment Network. Carrie joined forces with several top musicians in the Carolinas, performing a blend of her jazz, blues, and original music in music festivals and events across the Carolina’s, including such notable events as the Democratic National Convention, Theatre Raleigh Songwriter Series, Knight Theater with the Tosco Music Party, The Blumenthal Theater with Jazz Arts Initiative, Durham's Centerfest, and many more. While in Charlotte she wrote and recorded her jazz inspired album in 2013 entitled  "Home", featuring original songs in the style of the Great American Songbook. Produced by legendary drummer Jim Brock (Indigo Girls, Amy Ray,Kathy Mattea and many more)  Home features her song, “Thoughts Unspoken”, which also won the top Ten Finalist award with the UK International Songwriting Competition in 2014.

In 2015, Carrie moved to Raleigh, NC to become the songwriting instructor, vocal coach, and company member at Moonlight Stage Company. In addition to growing her private lesson studio at Moonlight, Carrie has written and produced three, full-length teen/family-friendly musicals with her Moonlight songwriting students. She also composed the musical score and theme song for the 11 time award-winning feature film, “Changeover” (currently on Amazon Prime), produced and directed by Moonlight’s founder, Estes Tarver. Nominated twice for Best Musical Score, she won Best Supporting Actress for her portrayal of the role of “Kacy Davis” in "Changeover" at the Love International Film Festival in Los Angeles in 2017.

In the fall of 2018 Carrie returned to the studio with producer/engineer Jason Richmond (Avett Brothers, Nnenna Freelon) to record 20 new songs. The result of these sessions produced a holiday album and a jazz & blues album entitled "Waves", released in Feb 29th, 2020. Featuring all NC musicians, "the music ranges from passionate bluesy explorations to quieter ballads, from rockish romps to moments of spirituality. " (Scott Yanow, LA Jazz Scene)

2020 brought many changes, as it did for all.  Carrie battled health issues with what she now calls "The Triple C":  A Concussion in January, Covid in July and then a breast Cancer diagnosis in September. Her album Waves was aptly named! With each new wave and seeming setback, Carrie found herself to be soaked, but not completely submerged!  2021 brings with it a renewed hope and optimism, made all the more poignant because of the struggles. She is grateful to have the opportunity to share this with audiences through music. 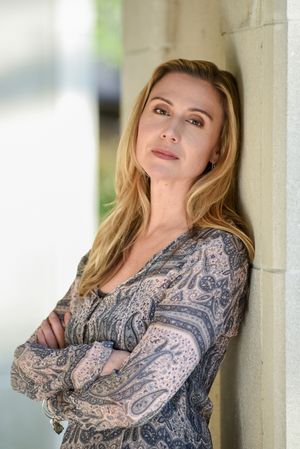 She's written and arranged "Home" in the cinematic style of Burt Bacharach or Cole Porter filtered through `70s AM pop, which today translates to easy listening, smooth jazz, and at times adult contemporary. It's classic, but it's also new. That's what's really exciting about "Home." Marshall has made the kind of record we don't hear often outside of artists like Diana Krall and Norah Jones. And "Home" is done extremely well with assists from producer/percussionist Jim Brock (Kathy Mattea), Van Sachs, Terry Peoples, and Mark Stallings. Marshall and this handful of co-writers and musicians have crafted an extremely polished, classic-sounding record in that style without making something that comes across as kitschy or retro.

Vocally it's obvious Marshall is capable of belting out country, pop, and gospel as well as the jazz and blues that fill her current repertoire. On "Home" she brings to mind contemporary jazz singers like Krall as well as some of the biggest voices of the `70s - Carole King, Carly Simon, Rita Coolidge, and a pre "Grease" Olivia Newton-John for instance. But while she shares qualities with those singers she carves out her own sound, while remaining stylistically versatile.

"Sentimental Journey," for instance, is a nod to vocal groups like the Andrews Sisters with Marshall handling all the harmonies, demonstrating her range and versatility. More, please!

The music throughout is subtle and Marshall's voice is lovely, but never over-the-top. You can clearly hear, for instance, each snare hit, cymbal shimmy and the low thump of walking bass on "Over the Moon." The fills are never showy on songs like "Carry On," a sunny, sing-songy track. "Don't Forget About Me" is a sultry samba laced with sax, piano, and guitar fills. There's a feeling of discovery and newness - as if she's observing places she's never been before or forcing a sunny outlook in the face of a new day - on songs like "Twelve Trinity Square" and "Carry On."

Marshall isn't solely a jazz singer though. Knowing that, "Home" seems like it might be a self-imposed challenge for a seasoned singer-songwriter and music instructor to see if she could create a new collection that may easily be mistaken for jazz standards. If that was the case, she certainly meets the challenge.

Veteran recording artist Carrie Marshall drives it home as a jazz singer-songwriter! There is little doubt fans will get lost inside the array of refreshing vocal arrangements. Her fresh and clean vibe is ideal for a romantic dinner or an evening backdrop with close friends.

The aptly titled HOME features eleven tracks. Each song captures Marshall's signature jazz style laced with hints of R&B. "Thoughts Unspoken" puts the listener in mind of a smoky Havana bar, complete with sweat-stained suits and wicker ceiling fans. The imagery continues with "Twelve Trinity Square" and "Let the Heavens Say", with the exquisite singer tickling the ivories at the grand piano.

"Seven After Eleven" and "Sunny Day" have a mellow tone, reminiscent of fellow North Carolinian James Taylor. "Red Rose" incorporates a sultry, seductive feel with a touch of the blues.

Surprisingly, the standard "Over the Moon" was written in 2013, not 1940 as some might assume, with its reminiscent jazz standard, classic feel. Inspired by the birth of Marshall's nephew, there are clever references to the old nursery rhyme “Hey, Diddle, Diddle” woven within this feel-good, love song.

"Don't Forget About Me", is a rousing samba-like treat, including saxophone and guitar interludes. You can almost see the artist smiling while performing "Sentimental Journey", (a tribute to the Andrew Sisters) and "Carry On", although both share old memories and wintery seasons.

"There's A Long, Long Trail" is the perfect final page of a scrapbook full of musical photographs. Originally written in 1913, the artist gives this WW1 era song her own stylistic twist, while recalling days as a preacher's kid, playing out of tune pianos in old, musty church foyers.

An award-winning ensemble makes the difference. Jim Brock, a legendary percussionist, drummer and producer, produced and mixed the album. Bassist Terry Peoples assisted with arranging songs along with guitarist Van Sachs, who was the first to introduce Marshall to the Charlotte music scene. Brad Bailey, yet another collaborator and frequent performing partner, lent his talent on guitar to many of the tracks. Craig Nelson can be heard on the upright bass. Nashville producer, songwriter and guitarist Paul Buono, added his touch by recording vocals, guitar and added production as well as co-writing a couple tunes. Saxophonist Gabriel Bello, keyboardist Mark Stallings and and Nashville
Symphony Flugelhorn player, Steven Patrick rounded out finishing touches.

Simply put, both followers and newcomers will be happy to add selections to their audio libraries. Carrie Marshall delivers. These days that's hard to find, but it’s definitely something to write home about.

WHAT PEOPLE ARE SAYING...

"Carrie Marshall possesses a wonderful voice and presents a wide variety of American classics as well as her own material. Equally comfortable alone at the piano or backed by musicians, you can easily detect the influence of the greats, but in the end you will acknowledge her ability to make the songs her own. Her vocal range and intelligent interpretation plant her firmly at the front of the class for today’s performers."

"In “Home” she’s created a collection of originals that play like standards. It’s a versatile record that riffs on the Andrews Sisters and Burt Bacharach as well as the contemporary jazz of Diana Krall (minus the brass and smoke) or Norah Jones filtered through 1970s AM pop singers like Carly Simon, Carole King, and pre-“Grease” Olivia Newton John."
- Courtney Devores
Charlotte Observer

"Take a little Diana Krall, add some southern blue-eyed soul, shake over ice & pour, and you've got a most tasty album!"
-Randy Franklin
Randy Franklin and the Sardines

"Carrie Marshall's...already made quite the impression in the local music scene."
- Page Leggett
Lake Norman Magazine

"She's really great. You see that right there and go,  'Why is she not nationally known?'"

" Carrie Marshall is one of the best talents we have the pleasure of working with.  A true professional!"